May, apparently, is deemed "Bike to Work Month." A wise choice, of course, as it would be much harder to lure people out into the nastiness of February. And this week is "Bike to Work Week." And today is "Bike to Work Day." Clearly I don't understand how public advocacy works, because frankly the Russian Nesting Dolls aspect of all of this seems a bit ridiculous to me. But in any case, I have been contemplating the act of city cycling a bit more than usual just lately.

I think calling it "Bike to Work" is kind of lame, too, because it centers our conception of our life around the place of employment. What a drab existence that implies! There is so much movement in our daily lives beyond just going to and from our place of work. Yes, there is commuting, but also grocery getting, shopping, going to appointments, visiting friends, going out to dinner, and just cruising around town. Let's call this whole realm Practical Cycling, instead.

In the past, I've been a serious practical cyclist no matter where I lived. Even in places where people wouldn't think it easy, I did it. I did it when I lived in car-centered places like New Jersey, Silicon Valley, and Atlanta. I rode through the famously record-breaking rainy winters of 1995 and 1996 when I lived in Eugene OR. I just wore good rain gear, squinted and shivered, and then changed clothes when I got to the lab. I never had a special commuting bike either, I did it all on regular old beater bikes fitted with racks and fenders. I didn't even really think riding around in town was something worthy of discussion, much less self-congratulatory pats on the back. I just did it.

Even when I was a kid, I did it. I got towed around in one of the original Cannondale bike trailers when I was too little to go far. And as children of 6 or 8 or 10, my brother and I were pushed out the door and onto our own bikes. One of my most vivid memories of childhood is summer's daily ride down to the neighborhood pool, clad in a swimsuit and old leather Nikes, with my towel draped around my neck. We all did it, every kid I knew, everyday all summer. We locked our bikes under a giant mulberry tree, and gorged on the free berries when the pool kicked us out for the dreaded "adult swim." After all these years, I am still grateful to my parents for instilling our independence at a young age by not driving us everywhere.

The point I am trying to make is not about gasoline, or carbon footprints, or any of the self-congratulatory green-living type stuff. Ride your city for selfish reasons. Ride simply because it will make you feel good about yourself and where you live.

When I moved to Atlanta, I rode a seven-mile commute up and down Peachtree Street from Midtown to Five Points every day. Peachtree is a busy road, but not nearly as dangerous as you would think since it was usually totally gridlocked. Riding around town was fast, far faster than MARTA, and immeasurably easier than driving. I rode all over in-town, and quickly fell in love with the city itself. It was fun, and interesting, and there was always something crazy happening. When people tell me they hate Atlanta, it is always clear to me that what they really mean is that they hated driving in Atlanta. I still think it is one of the greatest cities in the nation, once you get out of your car.

While I was living in Atlanta, I suffered a significant injury to my back and could not ride for 6 months. I could barely even walk, the pain was so bad. I was forced into my car, which nearly broke my heart. I still remember sitting in my car at a stoplight near the High Museum on a beautiful spring day, watching someone ride past, and just bursting into tears of jealousy and frustration. I could not fathom why everyone in the cars around me voluntarily trapped themselves in their vehicles when they could be riding freely through the warm air and the glorious Midtown architecture.

When I finally had spinal surgery and was able to ride again, I knew I would never take it for granted. Getting back on my bike was a victory. My first in-town ride after surgery, from my apartment in Midtown out to Sopo Bikes in East Atlanta Village, where I volunteered every week, was one of the best bike rides I have ever had in my life. EVER.

Today my work life requires driving about four hours on three or fewer days of the week, and working at home the rest of the time. It is true, I have not organized my life to allow for consistent bike commuting, but the trade-off is that I get to live in Asheville, one of the best places I have ever called home. For me, this arrangement allows me to hew the life I want out of the opportunities I have, and I accept the driving as part of the deal. I am still a strong believer in Practical Cycling, in all its forms, and rarely drive my car when I don't have to do so.

Today I rode out into my city. I rode to Lowe's (there is no bike rack at Lowe's), to the eye doctor, out to dinner, and to the grocery store. It was a glorious day to be on a bike, and once again I could not help but wonder why everyone was voluntarily trapping themselves in their cars. Sure, some people have no choice: they need to carry items too heavy or large to safely put on their bikes, or they are not mobile or fit enough due to illness or injury. As I cruised past all those people circling for parking spaces downtown, and locked up my bike right in front of my destination, I wondered whether they were as jealous of me as I had once been of that cyclist near the High. 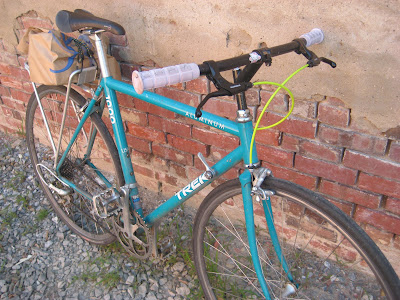 My current Practical Cycling bike is named Spiderpig. It is a 1988 Trek 1000, and I love it at least as much as any of the fancy racey bikes I own. I bought it used in 1993, my first real grown-up road bike, and for years it served that purpose well. When my previous town bike was stolen during my move to Atlanta, I slapped some old steel flat bars and a rack on the Trek and a town bike was born. You don't need anything special to ride around in the city, you certainly don't need a brand-new city bike, just a good attitude.

The more you ride around in your city, the more you come to know and love that city. The membrane between yourself and the world is so much thinner on a bike than in a car. Open yourself up to that feeling.
at 1:41 AM

You have reached my collection of bike race and bike trip descriptions. Plenty of half-assed racing and poorly-planned touring, but none of the Dirty Kanza tire selection guidance you are looking for!

go outside. shut the door.

Recreation is valuable in proportion to the intensity of its experiences, and to the degree to which it differs from and contrasts with workaday life.
-- Aldo Leopold,
A Sand County Almanac